To save Iraq from economic collapse and fight ISIS, contain... 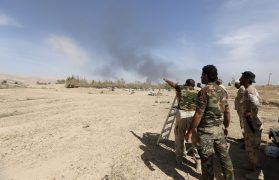 The day after Biden was inaugurated, Baghdad was hit by suicide bombers who, in a horrific manner, killed at least 32 people and wounded at least 100. The attack was a stark reminder that the Iraqi theater remains a crucial theater for fighting ISIS and preventing it from escalating. With this in mind, relations between the United States and Iraq are worth a bailout after deteriorating over the past four years. ISIS is in a strong position to enable it to carry out more routine attacks that cause large numbers of casualties. While the January bombing was its first major terrorist attack in Baghdad in more than three years, ISIS carries out almost daily attacks in The rest of the country could develop momentum similar to the one that had previously announced the caliphate in 2014.

There are two main challenges that make ISIS capable of massacres and triggering a resurgence: Iraq’s desperate need for economic recovery and the threat posed by Shiite militias. Addressing both issues requires that Washington adopt a set of guiding principles to share with Iraq – an approach based on the fact that the economic crisis in Iraq and the threat from Iran-aligned Shiite militias are two sides of the same coin.

The economic crisis in Iraq will lead to untold levels of poverty if not addressed. The COVID-19 pandemic, along with low oil prices, has added to the urgent need to stabilize the unstable security environment and revive the economy. According to the World Bank, 12 million Iraqis could soon be vulnerable to poverty. Iraq suffers from a budget deficit of about $ 4.5 billion per month and a debt of over $ 80 billion. At least 700,000 Iraqis enter the job market every year, but they struggle to find jobs.

In this environment of destitution and chaos, the influence of militias allied with Iran will increase. Their reach and power within Iraqi society is emphasized through a complex web of links between individuals and organizations that make eliminating them difficult, if not impossible. Central to its dominance is its ability to exploit socioeconomic conditions to inflate its ranks with the poor and strengthen their patronage networks. When combined with their ongoing and systematic violence against political opponents and the civilian population, it allows them to establish their hold on Iraqi institutions.

Ostensibly, the Baghdad government has effectively outsourced security to some of these groups in areas previously occupied by ISIS, but in reality the government is weaker than confronting it and imposing its authority in areas of strategic importance. The militias are being scorned by the local population as a result of their ongoing human rights violations and sectarian crimes. This allows ISIS to exploit the resulting grievances and cracks in the security environment, and possibly escalate their visibility.

These militias also lack the professionalism and discipline to contain ISIS – their primary focus is not on securing the defeat of ISIS, but rather on securing broader political and regional goals, in direct coordination with Iran. Monday Rocket attack on Erbil By groups allied with Iran, it appears that they will continue to undermine the coalition’s efforts to secure the enduring defeat of ISIS. In addition to consolidating their control over the illicit economies, the militias are strengthening their strongholds in northern Iraq. From places like Sinjar, militias and Iran can pursue cross-border targets in Syria.

Under President Trump, US-Iraqi relations have been fickle. While the Biden team in charge of the Iraq file should not emulate the Trump administration’s stance regarding Iran and its proxies, it should also not assume that long-term security sector reform efforts will rein in these actors. Biden should focus on empowering Iraqi actors who can hold accountable groups aligned with Iran, and who can restrict their ability to shape the political, economic, and security environment in Iraq. In the process, Washington could enable economic reforms that would loosen the control of these groups over the state.

While there was some hope that security sector reform would lead to the integration of Iranian-allied militias into the armed forces, as well as demobilization and disarmament, this has proven to be a costly miscalculation that the average Iraqi will pay for. By controlling the Popular Mobilization Forces (the 100,000-strong militia group that is commanded and dominated by Iranian proxies, and which was incorporated into the state in 2016), the Ministry of Interior and a host of other militias, practicing Iran-aligned groups Unjustifiably. Influence on the Iraqi state. They hate or kill champions of reform and good governance such as Hisham al-Hashimi And the Riham Yaqoob.

These groups have also assassinated government officials and are responsible for killing at least 700 protesters and wounding thousands. Yes, Iraq has an array of armed groups as a result of its recent history and prewar legacy – but it is this particular group of militias that negotiate with their rivals through systematic violence, including assassinations, rocket attacks and IEDs. Attacks on coalition personnel. It is this group of militias that attack, at Iran’s request, potential and much-wanted investors from the Gulf to prevent Iraq from developing its relations with the Arab world and saving its economy in the process.

The Biden administration has an opportunity to lay down new guiding principles for its relations with Iraq. You should focus on potential gains in the near and medium term.

Washington should look at two interconnected issues: its economic support for Iraq and the threat the Baghdad government faces from Iranian-backed militia groups. The resources and energy that it spends on Iraqi institutions should not empower actors that indirectly use violence to shape the direction of the political environment. It also means that US military support – designed to strengthen the Baghdad government so it can undertake the economic renewal of the country away from the threat of violence – must not become an enabler of militia violence. For example, the US Abrams tanks and other equipment that supplied Baghdad in the past are now in the hands of Iran’s bloodiest and most powerful partners. Iraqi protesters, civil society and the broader population are paying the price.

Washington’s counterterrorism strategy, in coordination with Baghdad, should seek to address the atrocities of Iran-backed militias as well as the ISIS threat. The former enables the latter at the end. As part of this, Washington should pressure Baghdad to stop expanding the treasury that allows militant groups to grow. The Iraqi federal budget proposal for 2021 has been criticized because it proposes to increase the budget allocations to the Ministry of Defense by 9.9%, the Ministry of Interior by 9.7%, the counterterrorism force by 10.1%, and the PMF, spectacularly. 45.7% on the previous budget for the year 2019.

Iran’s allies and supporting elements in Baghdad have created confusion and tarnished their complicity in human rights atrocities by adding more militia groups to their growing network of partners. They blame so-called “rogue groups” for human rights violations, missile attacks, attacks on protesters, and assassinations. The Biden administration should not fall in love with this evolving effort to create a degree of reasonable denial that allows it to escape responsibility.

Washington should also help Iraqi security forces isolate reformists from the threat of intimidation and assassination, to include politicians and activists. For a start, the United States should work with Iraqi civil society to improve its ability to uncover the link between Iran’s proxies and their front groups, an essential part of the accountability process. This could empower (and pressure) Al-Kazemi to take further action against Iran’s network of proxies in Iraq, and pressure the judiciary to act.

The reason it is so important to promote broad reform in Iraq is that I am gay Wrote last yearThe economic recovery will reduce the resources and manpower on which groups aligned with Iran depend. Iraq must erode the patronage networks that allow them to exploit the poor, and improve accountability and transparency to restrict their ability to commit atrocities with impunity. The United States should support the pillars of economic renewal – including the Prime Minister’s Office, the Ministry of Finance, and the Iraqi Trade Bank, among others – to bolster Iraqi efforts regarding strategic partnerships with the Gulf, and international financial assistance. The Monetary Fund and the World Bank, and the establishment of a modern banking infrastructure in the country.

The militias aligned with Iran are a major political force as much as a military one. Prime Minister Al-Kazemi must avoid taking competitors out of political actors who also want to contain these groups. Thus, the United States’ participation in Iraq should focus on mediation between those that have strong ties to Washington. Efforts to ensure that these groups are united on critical policy issues – such as revenue-sharing agreements, budget allocations, and disputed territories – must be central to US engagement in Iraq. Moreover, Washington should not be opposed to making support for the Kazemi government conditional on its ability to settle at least some of its differences with groups allied with the United States. Otherwise, short-term support for Iraq risks becoming either prohibitive costs or long-term gains for Iran-aligned groups.

Iraq’s conflict with Iran-aligned militias is extremely multifaceted, and no single political solution outside Baghdad or Washington will suffice on its own. But given the way in which these groups are exploiting the dire economic situation in Iraq, in particular, economic reform from within and support from outside must be considered an essential part of the overall response of these nefarious armed actors.