The next crisis in Idlib 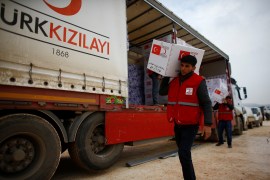 On July 10, 2021, Bab al-Hawa, the last remaining border crossing between Turkey and the rebel Syrian province of Idlib, may close, like Russia. Plan to veto An extension of Security Council Resolution 2533. For the 3.4 million civilians in Idlib – more than 2 million of them were displaced from elsewhere in Syria – this would be a disaster. About 75 percent of the population of northwest Syria depends on UN aid to meet their needs. About 85 percent of that aid comes through this border crossing.

Stuck between a severe economic crisis exacerbated by the economic collapse in Lebanon, More US sanctions in 2020With the COVID-19 pandemic, the situation is desperate in all of Syria. Says the United Nations High Commissioner for Refugees 13.4 million Syrians need humanitarian aidAn increase of 20 percent from last year, but the aid only came to 7.7 million. Nine out of ten people live in poverty while Syrians Without safe access to food, 57 percent fell in the last year. UNICEF says that 90 percent of Syrian children are children In need of humanitarian help. Internally displaced people are at particular risk, most acutely in Idlib and northwestern Syria. Cross-border aid is critical to averting a humanitarian catastrophe. However, this is exactly what might happen, accompanied by massive civilian displacement and a possible war between Russia and Turkey.

How did we get here? In 2014, the United Nations Security Council authorized UN agencies and their partners to use roads across conflict lines and border crossings to Turkey in Bab al-Salam and Bab al-Hawa, as well as al-Yarubiyah (to Iraq) and Ramtha (inland). Jordan). This has been “To ensure that help, Including medical and surgical supplies, reached the needy across Syria via direct routes. ”The authorization was renewed annually through controversial decisions until 2018. The Syrian government was notified in advance of the shipments and a UN monitoring mechanism supervised the loading in neighboring countries. In 2019, amid escalating disagreements, the UN Security Council Resolution 2504 The two crossings were allowed in Turkey, but not to Iraq and Jordan, for a period of only 6 months. By July 2020, following heavy fighting in Idlib, only Bab al-Hawa remained.

The 2019 fighting marked the end of the ceasefire agreement reached in September 2018 between Russia and Turkey. Aside from capturing the most populous rebel-held area in Syria, the main objective of the regime’s offensive was to take control of the vital highways Latakia-Aleppo (M4) and Damascus-Aleppo (M5). Neither of them has been opened or approved by Turkey as agreed. Nor was the extremist elements neutralized and the withdrawal of government and Russian forces.

The “red line” for Ankara focuses on preventing millions of refugees from joining the 4 million Syrian refugees living in Turkey. Public opinion turned sharply Against them, the initial welcome faded after 2017 as the economy slowed sharply and was hit further by the pandemic. The intense fighting after December 19, 2019 left more than a million people miserable along the Turkish border, leading to a Turkish military response against the Syrians and their Iranian, Lebanese and Russian allies.

The Turkish intervention led to another ceasefire agreement in March 2020 in which the rebel-held territory was reduced to 60 percent of the province. This agreement provides again for the opening of the M4 highway within a 6 km safety corridor and the removal of armed groups from the area. Neither of them happened. About 15,000 Turkish soldiers remain in Idlib and more in the surrounding enclaves held by Turkey in northern Syria. There is a troubled relationship with the dominant armed group, Hayat Tahrir al-Sham, a former branch of Al Qaeda that has been trying to rebrand as a national revolutionary group – with limited success. While it has a thorny business relationship with Turkey, they are He has reportedly met secretly with European officials Devise Moderately positive comments from James JeffreyThe recently departed US Special Representative on Syria. According to the European Union, the United Nations and others, the Headquarters for the Liberation of Al-Sham remains a terrorist organization.

For the Russians and Damascus, Hayat Tahrir al-Sham is a terrorist and the Bab al-Hawa crossing that it controls supports it and undermines Syrian sovereignty. A counter-proposal is to use openings across lines from areas of the system to provide humanitarian assistance. This is unacceptable to the West and other donors. Not only are they poor track record with many delays and refusals to even transport essential goods, but they are afraid to play into the hands of the system. Human Rights Watch He systematically revealed these challenges: “The Syrian government has developed a policy and legal framework that allows it to exploit humanitarian aid and finance reconstruction to finance its atrocities, advance its own interests, punish those seen as opponents, and benefit its loyalists.”

On the surface, the positions seem irreconcilable. Actually, Some, like Charles Lister, have called for a return to the 2014 era When aid was delivered across the border without a UN Security Council resolution. Louis Charbonneau, director of Human Rights Watch at the United NationsHe called for looking beyond the United Nations Security Council for help through it. It is unclear whether the West, mostly from the United States, has the toughness to support such measures. European Council on Foreign Relations’ Julian Barnes-Desi and Andrei Kortonov From the Russian International Affairs Council proposes to extend Bab al-Hawa for a period of one year in exchange for an increase in the flow of aid through Damascus with accompanying measures to monitor delivery. However, within a year, Idlib’s residents will find themselves totally dependent on an intransigent hostile regime. Others such as the University of Lyon-Fabrice Balanche We see the possibility of a deal between Turkey and Russia On the M4 highway leading to perhaps a Turkish reserve, or a new Gaza consisting of “a narrow strip of land under the control of … the Headquarters for the Liberation of Al-Sham, which manages a number of refugees, under the influence of international humanitarian aid.”

You know you are in a bad position when Gaza appears to be an acceptable outcome, especially these days as fighting is ravaging once again the Strip and Palestine. But for that to happen, an agreement must be reached with the Headquarters for the Liberation of Al-Sham or they must be militarily removed from the highway. Even if HTS wanted to engage, the most radical armed groups could have played their role The role of spoiler when it comes to deals with Russia. It seems that Turkey, the relationship between HTS and Russia will stick to what Saban Cardas of TOBB University calls An impossible mission in preserving Idlib’s unstable balance.

However, despite the frequent unrest, no one wants an all-out war, and it is unlikely that the regime is eager to absorb the more than 4 million Sunni dissidents in Idlib and northwestern Syria. Despite the Erdogan administration’s distancing from the United States and its European partners, as well as its regional isolation, there is still Turkey’s membership in NATO. Therefore, Idlib’s rump may appear, especially with the opening of the M4 highway, But the crucial issue is the participation of the United Nations in the assistance effort It will be quite controversial. Just as in Gaza, trade and aid routes are also likely to be contested for years – until a political settlement is reached.