Strengthening the G20 in an era of geopolitical competition between... 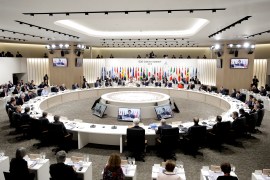 Now that it has become clear that geopolitical confrontation is part of the US-China repertoire, there is a risk that this bilateral relationship could divide the world, leading to yet another bipolar competitive era.

However, there are alternative dynamics that could multiply the relations between the United States and China through the involvement of other actors, and they are dynamics that can direct the relationship towards more international cooperation at a time when this cooperation is most needed. Within the G20 – which brings together the world’s major economies, which are also the main source of carbon emissions – there are opportunities for change. The G20 could become a vehicle for more ambitious global concerted action and a platform to address and manage geopolitical tensions.

In the 14 years that the G20 has gathered at the leader level, few leaders have produced strong policy outcomes for the entire group. The composition of this relatively small group of leaders varied from year to year. The G20 is large enough to bring about shifts in these alliances over time, with states rotating in and out of the multilateral leadership group.

This dynamic increased officials’ flexibility to negotiate complex outcomes, avoiding rigid blocks that stifle innovation and reduce policy space. Multilateral dynamics provide momentum and reward for creativity, as well as generate buffers for managing geopolitical tensions between the United States and China as other important states assert their interests, presence, and influence.

During this crucial transitional year with the new US administration, the countries promising leadership roles are Germany, France, Italy, Japan, Canada, Korea, the United Kingdom, the United States, and China. Their leaders have the weight, leadership, and technical skills to contribute to making the G20 play critical roles not only in meeting global challenges, but also in managing geopolitical relationships. Not all of them will advance forward. But this group is large enough to provide strong leadership for G20 reform, as well as to advance global solutions to global problems – rather than losing momentum due to the systemic competition between the United States and China.

Recognition of China as an acceptable member of the multilateral leadership group could be a significant achievement in easing geopolitical tensions.

Recognition of China as an acceptable member of the multilateral leadership group could be a significant achievement in easing geopolitical tensions. China and the United States may actually agree on measures to strengthen the G20 and advance coordinated action on public health, food security, climate change, oceans, weather monitoring, and developing country debt. There is every reason to believe that China can be a leading voice in implementing the Sustainable Development Goals (SDGs), given its record of advancing the SDGs within China and the rest of the world since its presidency of the G20 in 2016.

Strengthening the Group of Twenty

There are several ways in which the G20 could be strengthened in terms of institution-building and process reforms. (Many elements here stem from conversations I had with the Right Honorable Paul Martin, who was Canada’s finance minister for nine years in the 1990s before becoming prime minister. His efforts, with his US counterparts and others, were essential to developing the G20 mobilized to meet global challenges.)

First, the most comprehensive innovation in how the G20 summits work will be the intensification of the preparatory meetings that precede the annual summits – making them monthly and weekly processes that lead to the same results, rather than focus. Largely at the culmination of the two-day annual G20 summit.

Too many of the current G20 meetings throughout the year have been geared toward preparing for the Leaders’ Summits that take place once a year, rather than as vehicles for themselves. No problem can be solved in one meeting. The current set of systemic threats and global challenges require greater and more regular engagement.

Accordingly, there should be less focus on G20 summit data by leaders and more focus on key problems and how to address them. Less emphasis on words, more emphasis on actions.

Second, as a result, the G20 could become a platform for ministers themselves to act, not just feeding ideas to their leaders and waiting for them to act. The G20 countries, by definition, have enough weight in the world to drive change. In 2021, G20 health and environment ministers can take joint action on preparedness for global pandemics and on climate change as a pressing issue. These precedents will encourage similar efforts by G20 ministers in other areas, such as employment, technology, biodiversity, education and training, and social cohesion in the coming years.

The Group of Finance Ministers of the G20 has proven to be an effective mechanism for collective action, but it has also managed to create new institutions (such as the Financial Stability Board) and benefit from institutions (such as the International Monetary Fund and the Organization for Economic Cooperation and Development), which support, lobby, and serve the G20.

Third, ministers with other portfolios can follow this model and create new institutions that support, implement, and encourage their actions and use existing institutions to amplify their work. There are perceived weaknesses in international institutions in the areas of global health and global warming. The World Health Organization is neither a business platform nor reliable funding. The G20 health ministers, working together, could change that. UNEP has a broad environmental agenda; What is lacking is a more well-known and robust international institution focused solely on the threats of climate change and the acceleration of national action on climate change. Environment ministers of the G20 could lead efforts to create a climate stability agency to aggressively monitor and implement commitments on climate change.

Leaving geopolitical issues off the G20 agenda means ignoring the elephants in the room. The most significant change will be to enable the G20 to directly address geopolitical tensions by opening summit agendas to selective strategic and political security issues and by engaging foreign and defense ministers and officials in some of the G20 processes.

Leaving geopolitical issues off the G20 agenda means ignoring the elephants in the room.

Brookings Institution Fellow Bruce Jones recommended first that security issues be included in the G20 summits when creating the entity. There have been occasional foreign ministers’ meetings, but they have been sporadic and only partial. Security issues occasionally surfaced at summit dinners, for example, but they were never part of the G20 program of work. Freedom of navigation, electronic warfare management guidelines, and human rights (in Myanmar, for example) are examples of the kinds of security issues that could be usefully discussed within the G20 framework, because most countries have a stake in these issues.

These steps can help the G20 expand and deepen its agenda, creating continuous processes throughout the year that focus public and parliamentary attention on concerted action by major countries that have consequences for Persons. Much of the G20’s activities are about internal baseball between banks, corporations and bureaucrats, and not about political leadership on behalf of the public interest. There is more time spent on how to send the right signals to markets, interest groups, and officials than on communicating with the public and lawmakers. The excitement of international cooperation and understanding across cultures, professions and sectors is lost in a mixture of technical terms and formal words, with economics and financial jargon that drowns out the language of the common person. As a result, the G20 summits seemed distant and had nothing to do with the real life of ordinary people. Leaders lost their connections to their communities at these events, rather than attracting their audiences to them through the echo of their concerns and the response to them.

Senior political advisors to the G20 heads of state and government need to involve themselves in summits, and the G20 members need to exert greater influence to reconnect their leaders with their people by managing the G20 communications processes to prioritize relevant and meaningful content for citizens and social issues.

Finally, there is the problem of consistency and follow-up from year to year, as the country that hosts the G20 summit changes annually. Continuity can be significantly improved by creating a small and efficient secretariat to look at issues from incubation, to consultation, to educating leaders, to decisions, to communications, to implementation, to monitoring and evaluation. The secretariat should also be mandated to make year-round G20 operations more effective in ensuring that commitments are fulfilled and plans are implemented consistently year after year.

Given the current state of relations between the United States and China, many believe that the global system is facing yet another competitive, bipolar era. Actively revitalizing leadership and multilateral diplomacy, and engaging other countries in changing geopolitical dynamics, can be a game-changer. There is no reason to leave China and the United States alone to work on their bilateral relationship in which all countries carry enormous risks.

The G20 is a promising forum for addressing geopolitical tensions between the United States and China. Taking measures to strengthen the G20 and engage these tensions within the G20, rather than avoiding them, may be the most promising step to enable global governance to meet global challenges in the next decade. The G20 could become the forum through which relations between the United States and China could be successfully improved, by relying on the presence of other countries to pressure both countries to exercise global leadership on behalf of the entire world, rather than competing to divide them. Multilateral leadership that includes China and the United States as an integral part of the G20 is a powerful opportunity to advance the global agenda and to multilateralize the management of geopolitical tensions at the same time.