Middle Class in Iran and the Nuclear Deal 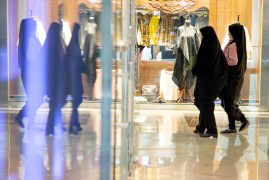 US and Iranian negotiators met this week for indirect talks in Vienna and Agreed upon procedures The two countries will return to the 2015 Iran nuclear deal, formally known as the Joint Comprehensive Plan of Action (JCPOA). Millions of Iranians are still suffering economically from the US maximum pressure sanctions and the epidemic. Meanwhile, the Biden administration has been waiting for Iran to return to compliance before it considers easing sanctions. Dozens of opinion pieces and bipartisan congressional letters urged President Biden to continue the maximum pressure campaign of his predecessor, using the damage to the livelihoods of millions of Iranians as leverage to extract more concessions.

The delay in fixing the broken nuclear agreement is not only due to the difficulty of choreography for the do -ers-first. There is a belief that sanctions soften Iran’s negotiating position. This belief, for which there was little evidence, is a misreading of the history of the deal. What pushed Iran to the negotiating table in 2013 was not the economic distress caused by the Obama administration’s sanctions, but rather a popular desire on the part of Iran’s middle class for economic improvement through access to the global economy, if not through better relations with the West.

A decade of economic stagnation triggered by sanctions and international promises that breached Iran’s middle class has reached a point that may reconsider its future as a force of political moderation and globalization.

In 2013, with strong support from the middle class, President Hassan Rouhani was elected to negotiate a nuclear deal with the United States, a key demand of voters. His victory was not the result of economic hardship but of hope. While the Obama sanctions influenced the election agenda, they did not move the outcome. Within months of the imposition of the sanctions, the value of Iran’s currency has collapsed, unleashing inflation that has undermined gains in the living standards of ordinary Iranians, including the middle class. But sanctions alone would not have produced the nuclear deal, as the tougher sanctions under Trump clearly demonstrated.

A decade of economic stagnation triggered by sanctions and international promises that breached Iran’s middle class has reached a point that may reconsider its future as a force of political moderation and globalization. What the Biden and Rouhani team accomplish in Vienna in the coming weeks may define this future.

The rise of the middle class in Iran

In the fifteen years leading up to the Obama sanctions in 2011, sustained economic growth doubled per capita GDP, lifted millions out of poverty and moved into the middle class. This shift was the product of market-based reforms after the end of the war with Iraq, rural-biased public investment in infrastructure, education, and health, and the rise in oil prices in the 2000s.

During the same period, Scan data appears Average living standards in urban areas, home to the middle class, have doubled. according to Widely accepted income threshold (Per capita spending above $ 11 on purchasing power parity, or twice the World Bank’s poverty line of $ 5.5 for upper middle income countries), the middle class during this period grew rapidly from 28 percent to 60 percent of the population, and rose The majority are mattresses. Of the poor, whose share has decreased from 33 percent to 7 percent. (The lower middle class decreased from 38 to 32 percent and the higher income group doubled its share from 1 to 2 percent.)

As the largest social class with the highest level of education, Iran’s middle class is a powerful voting group. In 1997, when Iran elected its first moderate and pro-convergence president, Mohammad Khatami, the middle class made up only 30.5 percent of the population and 56.1 percent of the educated population of voting age (over 16 years old and had at least a secondary school education). By 2011, they had doubled their share of the population to 59.8 percent and from educated voters to 80.9 percent.

Rouhani’s election in 2013 benefited greatly from the support of the middle class, which was revitalized with his promise to end sanctions and repair relations with the West. In the first round, he won over six other candidates, with 51 percent of the vote. Four years later, after he signed the nuclear deal and the economy rebounded while sanctions were briefly eased in 2016, Rouhani was re-elected by an overwhelming majority. He won 57 percent of the vote against his rival, Ibrahim Raisi, the current head of the judiciary. In the booming middle-class region in northern Tehran (Shamirat), the voting share for Rouhani jumped from 49 percent in 2013 to 79 percent in 2017, indicating his growing popularity among the middle class.

Sanctions and the Joint Comprehensive Plan of Action

Obama’s sanctions helped achieve the nuclear deal because it offered a peaceful path to an economy in which the middle class was familiar and prosperous. They also helped by showing the middle class the fragility of Iran’s global ties, and the need for Iran to restrict its nuclear ambitions to access the global economy. Sanctions worked because public policy was neither aimed at regime change nor pitted Iran’s middle class against the country’s leadership and powerful security forces.

In contrast, Donald Trump and his Secretary of State, Mike Pompeo, called for surrender and talked a lot about regime change. They called on the Iranians to participate in the overthrow of their government without assuring them how Iran would emerge better than other countries in the region where a similar radical change had taken place. The middle class in Iran was not interested because their hands were completely managing life during economic and health crises. In the fall of 2018, when protests erupted in the wake of rising energy prices, the middle class in Tehran and other major cities erupted It was noticeably absent.

The future of the middle class

Biden Foreign policy claims to serve the middle class– The American middle class, that is. But it should look further and wider at the middle classes in developing countries, especially those in the Middle East. The middle classes are often seen as anchors of democratic values, but these values ​​do not thrive in difficult economic times. As John Maynard Keynes Famous warned in 1919, Economic distress can easily tip the balance in favor of authoritarian rulers who provide economic security.

Iran’s middle class has been in a state of economic decline since 2011. Years of negative and positive growth have followed each other, often as sanctions intensify or ease. Last year, real per capita spending was back to where it was in 2001, before the oil boom. Since 2011, the middle class has shrunk by around 8 million people.

a vote The study taken in early 2021 indicates that economic hardships have changed Iranians’ perception away from supporting moderate politicians and globalization. Support for the JCPOA has decreased from about 80 percent when it was first signed to 50 percent now. Majorities believed their government should wait for the United States to lift sanctions before speaking to Biden. The poll also showed a decline in the popularity of President Rouhani and his administration. Only one in three views him as positive compared to 3 in 4 for Ibrahim Raisi, who defeated him hard in 2017. Rouhani’s most popular cabinet member, Foreign Minister Javad Zarif, is also viewed less favorably than Raisi.

Given that the JCPOA will not be up and running by next June when Iran elects a new president, it is likely that conservatives will dominate all branches of government in the coming years. This will make Biden’s task of reverting to the JCPOA and extending it more difficult. However, as difficult as it is for the United States to shelve its preferred sanctions tool, from a long-term perspective it would be better for it to stop using Iran’s middle class as leverage to pressure the Iranian government.