How the Quad Can Match the Hype 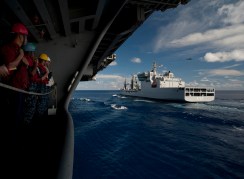 Last month, a once obscure diplomatic grouping suddenly took center stage in the defining geopolitical competition of this century. When the leaders of the Quad—a coalition among Australia, India, Japan, and the United States—met virtually on March 12, its members proclaimed a new chapter in Indo-Pacific competition. The four leaders called the gathering a “spark of hope to light the path ahead” and promised collaboration on everything from COVID-19 vaccination campaigns and maritime security to climate change and infrastructure investment.

The logic behind such an effort is clear. A more assertive China is extending its influence across the Indo-Pacific and around the world. Existing alliances and institutions aren’t up to the task of addressing the consequences, and domestic politics across the region mean that an “Asian NATO” is off the table. That’s where the Quad comes in: as its members increasingly find themselves at loggerheads with Beijing, the group has become a test case for a new kind of flexible multilateral partnership designed to shape the balance of power in the Indo-Pacific, offer alternatives, and alter China’s calculations. The administration of U.S. President Joe Biden has staked its regional strategy on this approach.

Nevertheless, the Quad’s growing public profile comes with a parallel rise in expectations. Members and other partners increasingly look to the group to deliver on a range of thorny and intractable issues—including Chinese territorial revisionism and Beijing’s efforts to weaponize economic interdependence and rewrite international norms. To make good on those expectations, the Quad will need to deepen existing security cooperation, economic partnerships, and multilateral coordination. If it succeeds, the group can help ensure a “free, open, inclusive, and resilient Indo-Pacific,” as its leaders have promised. If it fails, though, the Quad risks a world characterized by territorial insecurity, economic coercion, impotent international organizations, and authoritarian technology.

RISE OF THE QUAD

The Quad has had a contentious history. The first hint of cooperation among its four members came when they coordinated disaster relief efforts in the wake of the deadly 2004 tsunami that killed more than 200,000 people across the Indian Ocean. The group formally convened in 2007, when the four countries held an inaugural meeting in Manila and conducted a major naval exercise, along with Singapore, in the Bay of Bengal. Within months, however, enthusiasm waned. Although it was Australia that first assured Chinese leaders in 2008 that no further Quad meetings would take place, other members had also begun to voice serious reservations. At the time, all of them, including Washington, sought Beijing’s cooperation on other policy priorities.

It took several years for each country’s calculation to change, as their respective relationships with Beijing reached new lows: the United States and China engaged in a trade and technology war; tensions between Beijing and Tokyo spiked over the disputed Diaoyu/Senkaku Islands; Australia uncovered Chinese interference in its domestic politics; and Chinese and Indian troops clashed in several standoffs along their disputed border. One of these crises, touched off in 2017 by Chinese road construction in the Doklam plateau in Bhutan, helped revive the Quad after several years of neglect. Talks resumed in November of that year, followed closely by a series of bilateral and trilateral agreements, dialogues, and military exercises.

The Biden administration has enthusiastically embraced the coalition. U.S. Secretary of State Antony Blinken held a meeting with his Quad counterparts within a month of the new administration taking office. Diplomats from the four countries use the platform to discuss pressing regional issues, including China, the recent coup in Myanmar, humanitarian assistance, and cybersecurity. Regular engagement through the Quad also facilitates bilateral and trilateral cooperation, including with non-Quad partners. Australia, Japan, and the United States, for instance, have coordinated their approaches to infrastructure financing. Australia, India, and Japan have focused jointly on supply chain resilience. In October 2020, India and Japan signed on to a statement on digital encryption released by the Five Eyes intelligence alliance—which includes Australia and the United States.

Members increasingly look to the Quad to deliver on a range of thorny and intractable issues.

The Quad also coordinates with larger, issue-specific coalitions. During the height of the COVID-19 pandemic, its four members, along with New Zealand, South Korea, and Vietnam, began meeting regularly to coordinate vaccine development, international travel restrictions, and other public health policies. A more senior-level meeting involving the Quad states, Brazil, Israel, and South Korea arose in parallel to discuss medical cooperation, economic recovery, and travel protocols. Separately, the British government proposed a coalition of ten democratic countries, including the Quad members, that would cooperate on 5G technology. All four states are also founding members of the Global Partnership on Artificial Intelligence, based at the Organization for Economic Cooperation and Development, which supports responsible and democratic uses of artificial intelligence.

Finally, Quad members cooperate extensively on defense and security issues. Although the long-running Malabar naval exercise, nominally a bilateral Indian-U.S. naval affair, is the centerpiece of the group’s security partnership, member states have expanded their engagement beyond that single event. The Quad countries, for instance, conducted a tabletop counterterrorism exercise in November 2019 and convened a meeting of cyber experts the following month.

These nascent security ties are built on growing military-to-military relationships: India and the United States, for instance, recently finalized an agreement on secure communications and geospatial information sharing. The two countries also launched a new amphibious military exercise in 2019. Australia and Japan, for their part, are set to finalize an agreement that would allow their militaries to operate in each other’s territory. India and Japan recently conducted their first bilateral air and ground exercises, and Australia and India signed a new logistics agreement. Canberra and New Delhi regularly share shipping and maritime data. These activities are all supported by regular bilateral dialogues, basic defense agreements, staff talks, and military exercises. Although the tangible benefits might not be immediately evident, these developments mean that the four states could now respond to a regional incident far more effectively than they did following the 2004 tsunami.

Military cooperation isn’t limited to Quad countries alone. In early 2021, members participated in an antisubmarine exercise with Canada and a separate naval exercise with France in the eastern Indian Ocean. In 2019, moreover, Japan, India, and the United States conducted a so-called group sail in the South China Sea with the Philippine navy—designed to demonstrate their shared commitment to open sea-lanes. Australia, Japan, and the United States have also held joint military exercises with South Korea. The four countries increasingly send observers to the others’ bilateral military exercises and participate in one another’s multilateral drills.

But the recent Quad summit didn’t only provide a new direction for disparate military, diplomatic, and economic activities. It also broadened the group’s agenda to include other immediate priorities. Leaders established working groups on COVID-19 vaccines, critical and emerging technologies, and climate change.

Yet for all the progress the Quad has made, the coming years will test its ability to shape the Indo-Pacific’s future. Beijing’s assertive international behavior means that the four states are under pressure to deliver on a range of complex issues, including maritime security, vaccine distribution, resilient supply chains, and technological standards. If the Quad is to meet these high expectations, it will have to think seriously about broadening and deepening its partnership—all while ensuring that it does not bite off more than it can chew.

One route forward is to deepen security cooperation among Quad members. In the past, the United States has suggested holding meetings of defense ministers or national security advisers to coordinate defense and security policies. Quad members already hold separate so-called 2+2 bilateral meetings of foreign and defense ministers, so further expansion (perhaps starting at a working level) wouldn’t be a stretch. Additionally, routine and less scripted exercises would help improve military interoperability. These lower-profile events could assuage concerns among non-Quad partners over military confrontation or exclusion and might even encourage them to participate.

This sort of regular engagement could also lay the groundwork for other forms of security cooperation. That might include planning for scenarios such as a conflict in the South China Sea or establishing a military division of labor—where each country could play to its strengths. All four Quad members could also improve their efforts to share or co-develop new technology, including in the military, cyber, and space realms. Although the United States enjoys healthy technology relationships with Australia, India, and Japan, cooperation among those latter three countries remains more limited.

The Quad represents the best hope for building a successful balancing coalition in the Indo-Pacific.

The Quad also needs to continue expanding its agenda beyond diplomacy and defense. That means closer consultation among Quad members on trade, finance, foreign investment in sensitive sectors, commercial technology, and information security. Doing so would help build resilience against Chinese espionage, disinformation, or economic coercion. The Quad’s three new working groups represent a good starting point, but the four states will need to do more. Bringing in nongovernmental actors such as industry groups, subject matter experts, and independent regulators would be a logical step, given these actors’ role in defining policies and standards.

The Quad’s vaccine initiative will be a test case here. If implemented successfully, the program would help the Quad demonstrate its practical and normative value as an alternative to Chinese hegemony. More effective coordination within multilateral institutions such as the United Nations and the G-20—where all four states are members—would serve a similar purpose. Wherever possible, bringing in other like-minded partners would also bolster these efforts.

One risk for the Quad is that its members succumb to temptation and commit to too many objectives—losing focus on maintaining a favorable balance of power amid China’s rise. The current proliferation of consultations and dialogues risks straining schedules and working at cross-purposes. The Quad will also need to reassure nonmember partners that the group is not exclusive and is instead open to cooperation. The group should reiterate that it is not trying to dictate choices for smaller countries but instead seeking to shape Beijing’s behavior by strengthening countervailing coalitions and expanding political, economic, and military options for vulnerable states—all while strengthening regional resilience.

Another risk is a lingering concern in each Quad country about the others’ capabilities and willingness to commit to the partnership. Some question the durability of Washington’s dedication to offshore balancing and U.S. economic leadership in the Indo-Pacific. Others worry about Japan’s history of pacificism and long-term demographic weaknesses. Separately, analysts are uncertain about India’s economic and military capabilities, New Delhi’s historical reservations about partnering with the United States and its allies, and its alignment on values. Others fear that Australia’s economic dependence on China might constrain its ability to confront Beijing. The siren song of protectionism poses an additional problem, potentially luring states into a vicious cycle of economic nationalism.

In an era where Beijing’s assertiveness has become alarmingly routine, the Quad represents the best hope for building a successful balancing coalition in the Indo-Pacific. Failure to live up to this role would mean a significant setback for regional security, sustainable economic development, technological standards, governance norms, and international institutions. The stakes and expectations are high: an era of intensifying competition requires an ambitious yet realistic basis for geopolitical cooperation. The Quad is the right tool for the job.