Fragility in Chad and Counterterrorism Strategies in West Africa 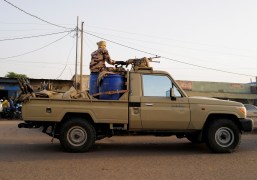 The death of the President of Chad, Idriss Déby, on April 20, and the subsequent military coup, destabilized the country and other parts of West Africa. Likewise, over the past year, the security situation has deteriorated significantly in Mali, Burkina Faso, Niger and northern Nigeria. The region faces many severe challenges from climate change, desertification, poverty and inequality to mismanagement, militancy and terrorism, which have been accelerated by a variety of local fighters and international terrorist groups. During the three decades of authoritarian rule by President Deby, Chad has come to be seen as a major pillar of the fight against terrorism in the region and a major ally of the United States and France. However, President Déby’s death highlights once again the dangers of building counterterrorism strategies around authoritarian leaders and the struggle to find effective political alternatives.

On May 7, Foreign Policy in Brookings will host a panel of experts to study the latest developments in Chad, as well as regional implications and deeper policy dilemmas for counterterrorism, stabilization, and good governance.

After their remarks, the panelists will take questions from the audience. Viewers can email questions to [email protected] Or Twitter using #WestAfrica.