While South Korea’s economic ties with Southeast Asia aren’t as large as China or Japan, its economic involvement and people to people ties with the region are proportionally much greater than its two larger neighbors. Southeast Asia is more important to South Korea than it is for China and Japan.

Parts 1-4 will list the facts of South Korea’s engagement in Southeast Asia because very few people here know about South Korea’s extensive presence in the region. Once you understand this, you will comprehend the reasoning behind South Korea’s New Southern Policy of 2017, why its decision to build an aircraft carrier isn’t absurd. Like Japan, South Korea has to shield itself against China-North Korea in Northeast Asia, while thrusting southward to “join forces” with the US in the Indo Pacific.

The first “official” exchanges between Korea and Southeast Asia took place in 1391 when Nai Gong, an envoy of the Siamese king, arrived at the capital of Koryo˘ Dynasty (918–1392) in a mission to sound out the Korean market and to confirm the possibility of bilateral trade. However, we don’t know whether it was a Chinese merchant based in the court of Siam pretending to be official envoys or an actual official diplomatic mission.

Much of what Korean officials knew about Southeast Asia was through Chinese and starting from the 17th century, Japanese official sources. Secondly, they had unofficial contacts with Southeast Asian envoys, particularly Vietnamese, during their tributary missions in China. However, starting from the mid-19th century Koreans begin to have more direct knowledge of the region, unfiltered by her two larger neighbors.

For most Southeast Asians the first widely known contact with Koreans were those who served in the Imperial Japanese Army during the Second World War.

Roughly 320,000 South Koreans served in the Vietnam War, the second-largest foreign contingent after the United States. On the other side, North Korea sent two fighter squadrons and an anti-aircraft regiment.

The first involvement of South Korean business in Southeast Asia was as contractors to the US military during the Vietnam War, most notably Hyundai. These contractors also involved themselves non-military US/Western funded projects. South Korean President Lee Myung Bak was a manager for Hyundai Construction on the Pattani–Narathiwat Highway in the late 1960s.

In terms of FDI, here are the figures for East Asian countries in ASEAN for 2018. East Asian companies invest in Southeast Asia because of proximity. cheap labor and young labor force. Its median age is 29.1 (vs 38 years for China) and its average per capita income is US$4890, half that of China. The income level is like China in 2010, its median age is the same as China in 2000, the fertility rate is like China’s in 1992.

In 2020, 80% of ASEAN’s FDI went to Vietnam, Indonesia, and Singapore. This is a rough estimate since many companies use offshore entities to invest. For example, 28% of Taiwan’s outbound investment went to offshore havens. A lot of investment that goes to Singapore gets invested elsewhere in ASEAN.

South Korean companies started to seriously shift production from China to ASEAN in 2017, after the THAAD incident. South Korean FDI to ASEAN countries totaled US$9.55 billion, compared to the US$5.8 billion in FDI to China. Vietnam, Singapore, and Indonesia accounted for 88.6% of South Korean FDI in the ASEAN region last year, indicating an intensifying concentration of investment in those countries compared with the 50.1% recorded in 2010

About 73% of South Korea’s small to medium firms investment in ASEAN is manufacturing. Vietnam takes up 2/3 of their ASEAN investment, followed by Indonesia and Singapore (p162). 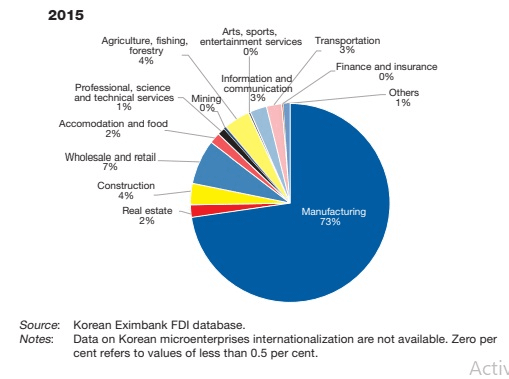 Many South Korean companies see Southeast Asia as a large consumer market. For K-pop groups, it is their key foreign market after they were “banned” in China in 2017.

It is even more so for Lotte, the company at the center of the THAAD fiasco. Indonesia, Malaysia, the Philippines, and Vietnam make up 58% of Lotte’s overseas revenue.

Malaysia was the top contributor with 30.3 percent of the total, followed by Indonesia with 13.3 percent and the United States with 9 percent. China ranked fourth with a 7.9 percent share, down one spot from the previous year. The world’s second-largest economy was the leading source of Lotte’s overseas revenue with 25 percent in 2016.

The CJ Group owns the largest Cinema chain in Vietnam and Myanmar, and the second-largest in Indonesia.

South Korea is the third-largest source of tourist for ASEAN after China and the EU. ASEAN is the top tourism destination for South Koreans

Roughly 650,000 South Koreans are residing in Southeast Asia, with the bulk of them living in Vietnam, the Philippines, and Indonesia Of the 868,000 foreign workers in South Korea about 30% come from Southeast Asia (p214).

In South Korea, Southeast Asians make up 1/3 of the international students vs 44% for China. The flow also occurs in the opposite direction, the Philippines has become an English camp for South Korean students. with 30,000 studying short-term courses in the Philippines every year.

In the section, I will focus on South Korea’s military engagement with Indonesia, the Philippines, and Vietnam. The first two due to their extensive South Korean arms purchases, and Vietnam due to the potential for much greater defense cooperation.

South Korea’s most extensive military ties in Southeast Asia are with Indonesia. In 2006, South Korea and Indonesia signed a strategic partnership agreement. The cooperation with Indonesia ranges from arms sales to technology transfers and defense industrial cooperation (KF-X Fighter). The scale and diversity of South Korean arms exports to Indonesia—ranging from small arms, infantry fighting vehicles, and self-propelled artillery to fighter jets and submarines—represents the most consequential aspect of its push to broaden its defense partnerships in the Indo-Pacific

South Korean ties with Vietnam, both political and military, have been hampered by its role in the Vietnam War. However this difficult history—recently being reexamined for evidence of long-forgotten massacres of Vietnamese civilians and the sexual exploitation and rape of Vietnamese women— has not stopped ever-closer economic and personal ties between the two countries. But closer defense ties have been hindered by

South Korea is the third-largest arms supplier in the region after the US and Russia for 2014-2018, and the region is its biggest export market (p14). Here is a list of South Korea’s major weapons exports to the region

There are two motives for the arms sales. First to spread the cost of maintaining its defense-industrial complex. The second is to offer Southeast Asians an alternative to China. South Korean strategy has been to aid the rebalance without explicitly antagonizing China

Korean security cooperation with ASEAN members appears to be fueled by a perceived desire to expand the ROK’s diplomatic influence beyond the peninsula, reduce dependency on the United States and China, make contributions to reinforcing the liberal rules-based international order, play a middle power role, and find markets for the country’s defense products to sustain the South Korean defense industry,

In 2017, President Moon Jae-in launched the New Southern Policy (NSP), which aimed to elevate the country’s ties with Southeast Asia and India to those with China, Japan, United States, and Russia. My view on this is given its extensive ties that had existed before 2018, second only to its ties to China, a belated admission by the South Korean government of the region’s importance,

One must note all the Northeast Asian states, China, Japan, South Korea, and Taiwan have a Go South policy, whether implicit or explicit.

There are three goals to the NSP

What sets the New Southern Policy apart from other previous engagements with ASEAN is, in addition to economic aspects, it includes a diplomatic and military component.

NSP was to provide, as argued by Choe Wongi, Head of Center for ASEAN–India Studies at the Korea National Diplomatic Academy (KNDA) in

The peace component of the NSO has been large. However, in January 2021, the US and South Korea announced the integration of the Indo-Pacific Policy and NSP at the margins of the East Asia Summit

Our cooperation is comprehensive and growing. We are enhancing economic prosperity through cooperation on infrastructure, energy, the digital economy, smart cities, and natural resources management (“Prosperity”); building a people-centered community while championing good governance by investing in human resources development and anti-corruption programs, and investing in human capital by promoting women’s empowerment, and spearheading health and climate change initiatives in the Pacific Islands (“People”), and ensuring peace and security through capacity building efforts to counter transnational crimes and drug trafficking, and promoting cybersecurity, maritime security, marine environmental protection, and disaster response and preparedness (“Peace”).

Unlike before there has been more substance recently in South Korea’s attempt to seek greater involvement in regional security. First, the South Korean Defense Minister, Suh Wook, said after a meeting with U.S. Secretary of State Antony Blinken and Defense Secretary Lloyd Austin

What is protecting the Korean Peninsula is centered around the Korea-U.S. alliance, but we believe the Korea-Japan security cooperation is also a valuable asset, which is why we need to maintain this

Secondly, South Korea’s new aircraft carrier is most likely to be recruited into the US Indo-Pacific strategy.