Dealing with Iraqi militias allied with Iran like ISIS 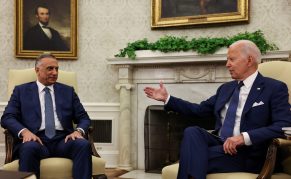 Iraq is full of crises. In the scorching summer heat, the country suffers from electricity and water shortages, and protracted challenges that have routinely led to violent protests as part of broader grievances about a lack of services and endemic corruption. On July 12, a fire was killed in a hospital At least 60 people As a result of neglect and mismanagement. On July 19, the Islamic State (ISIS) carried out a deadly attack that resulted in the death of At least 35 people in Baghdad. In the midst of all this, Iran-linked Shiite militias routinely assassinate civilians and activists, and use missiles and drones to attack US personnel, Iraqi military forces, and US-allied actors such as the Kurdistan Regional Government.

Prime Minister Mustafa al-Kadhimi, who took office last year hoping to bring some relief to the Iraqi people, is presiding over a precarious political and security environment. Space could soon emerge for an ISIS resurgence, however a catastrophic spasm could unfold if Iraq were once again caught between persistent attacks by ISIS and Iranian proxy groups that have been responsible for near-daily systematic human rights atrocities.

Thus was Al-Kazemi’s visit to Washington and oval office meeting With President Joe Biden, this week has been very appropriate and important. The two leaders announced that the United States would transition fully into the role of training, advising, assisting, and sharing intelligence in its security relationship with Iraq, and that by December, U.S. combat forces would no longer be deployed. While this may constitute a cosmetic change – the United States does not have combat troops in Iraq – it is intended to address the pressure on Al-Kadhimi to placate Tehran and its Iraqi proxies, who have been demanding the withdrawal of US forces and have recently escalated their attacks on US and allied targets. Al-Kadhimi must balance these demands with Iraq’s continued dependence on American support to fight ISIS and rebuild the economy after years of conflict and destruction.

Iraq faces a potential moment of reckoning that may reflect the events that unfolded just seven years ago when the Islamic State took over ISIS. a third of the country. The United States remains an integral part of the grueling campaign to combat ISIS, which has intensified attacks in recent months. The group co-opts, blackmails, and coerces communities to create Infrastructure Which allowed it to seize vast swathes of territory in 2014. Without continued US military support, the jihadists may resurrect the so-called caliphate.

The necessity of defeating ISIS cannot be overstated, but one of the less important enabling factors for the group’s supremacy is the continued dominance of Shiite militias linked to Iran. They directly undermine the government by attacking its security forces, while empowering ISIS through losses to the Iraqi population. Iran’s proxy groups are responsible for killing more than 600 Iraqis linked to the protest movement, wounding thousands, routinely assassinating or kidnapping activists, and turning Iraq into a republic of fear.

They are holding the state hostage by the barrel of a gun while enjoying constitutional legitimacy as members of the Popular Mobilization Force, which has a federal budget worth a while. At least 2 billion dollars. They are also taking advantage of the religious legitimacy that Grand Ayatollah Ali al-Sistani granted to the Popular Mobilization Forces in 2014, when the organization was formed to fill the void left by the collapse of the army. Since then, those groups that have been Allied with Ayatollah Sistani Unrelated to Iran, she left the PMF, protesting human rights atrocities and abuse of power.

Seventy-seven percent of Iraqis, including 76 percent in Shiite areas, are skeptical that the upcoming elections, scheduled for October, will lead to accountability and justice due to the control of the political environment by Iran-aligned militias. The desperation has reached such a point that there are growing calls for a boycott, which could lead to a repeat of the 2018 elections marred by fraud and which saw a coalition led by Iran-aligned groups. He ranks second in his electoral debut. Since then, the Iraqi state has been in a state of crisis not seen since the ISIS takeover of Mosul. Tens of thousands protested against Iran’s proxy groups, to no avail and at great human cost.

Iraq and the United States: Fighting the same war

Washington’s counterterrorism strategy in Iraq focuses on the enduring defeat of ISIS. But like Iraq, the United States is also mired in a war with militias allied with Iran, with its bases in Iraq under attack on At least seven occasions In July alone. Washington has tried to find ways to counter the insidious Shiite militias and their affiliates, but their integration into the Iraqi political system and society does not succumb to the deployment of the same tools used to fight ISIS.

By formally treating Iran-linked Shiite militias as equivalent to ISIS and setting policies accordingly, the United States and its allies can at least begin the process of developing standards to fight these groups in a viable and sustainable manner. Senior Iraqi officials It has already begun to classify these attacks as terrorist, while the Biden administration has struck at least Iran’s proxies two occasions since taking office. The change in rhetoric from the Iraqi side and proportionate strikes from the United States are welcome, but formally treating Iran’s proxies as equivalents to ISIS would establish a sense of direction and purpose for future U.S. military responses to militia attacks and the broader question of how to do so. The United States should deal with Iran’s proxies. A missing signal of intent could enhance US deterrence.

This contrasts with the current approach to ad hoc retaliation, in response to a set of attacks rather than when the attacks occur. Iranian proxy attacks should not be treated as anomalies and symptoms of regime collapse in Iraq. This reduces the imperative to contain these groups and puts them in a stronger position. Far from being a symptom, Iran’s proxy groups are the problem themselves and are directly responsible for terrorism and turmoil in the country.

During this week’s meeting, Biden and Al-Kadhimi used the right tone aimed at appeasing opponents of the deployment of US forces in Iraq. To make US counterterrorism support important — and to make the case for continued deployments beyond December — America’s allies must lift the heavy burden inside Iraq. However, these allies must strike a grand bargain among themselves that will enhance their attempts to keep US forces in the country and create a buffer against the influence of Iran and its proxies. They often focus on their own rivalries, which limits their ability to decisively shape the political landscape, in contrast to the more organized, disciplined, and strategic bloc of Iraqi actors that Iran has nurtured and managed.

Washington should make it a priority to steer Iraq’s US-allied political actors toward a grand bargain that they are unlikely to reach on their own. The United States has helped the KRG and Baghdad improve relations since Al-Kadhimi and KRG Prime Minister Masrour Barzani took office. The broader effort may be based on values ​​and goals that bind U.S.-allied actors and establish sustainable dispute-resolution mechanisms.

Treating Iran’s proxies as equivalents to ISIS, along with a formidable US-allied bloc in Iraq, could bolster the Biden administration’s credibility and negotiating hand with Iran, both in the nuclear talks and in regional de-escalation efforts. In practice, combined with continued US strikes on Iranian proxies, this means an increased risk calculation for individuals who command or control Iran’s proxy groups, posing a credible enough threat to constrain their malign behavior. It also requires extending terrorist sanctions and designations to Iran-aligned groups responsible for missile attacks and other human rights abuses—and influencing those directly or indirectly associated with these actors. This would limit the ability of agents to form cross-party alliances that are integral to their political dominance and influence.

While the United States cannot eliminate these groups and their infrastructure, it can begin to focus its efforts more on the individuals, rather than the organization: This should include ending funding and institutional support for Iraqi institutions controlled or controlled by the individuals or groups that you answer. to Iran. Domestically, this will help create a balance and prevent Iran’s proxies from expanding their control further.

This is where the PM comes into the picture. Since assuming the position, Al-Kazemi’s leadership style and position has contrasted starkly with his predecessors, who either came to the position or left it with a blood-stained and conflict-ridden relationship with their opponents and the Iraqi population. Al-Kazemi lacks the domestic and geopolitical baggage that formed his predecessors’ ties to regional powers. But Al-Kadhimi – a compromise prime minister – lacks a political base, and this is where the United States can help him secure another term, an opportunity that Washington and its allies should seize.