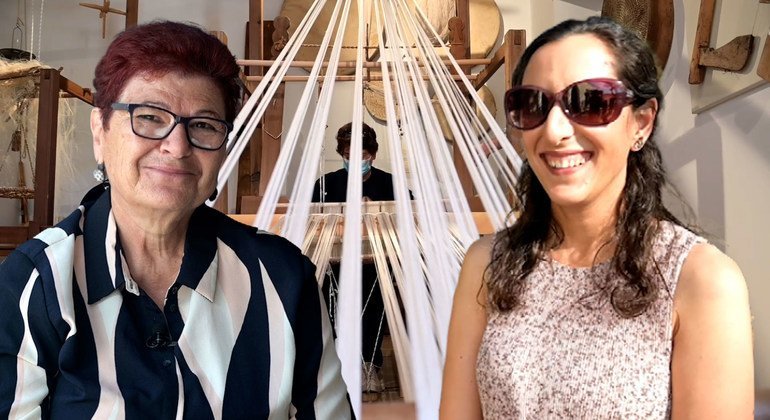 Hand Toikan, a Turkish Cypriot, and Flora Hadjigeorgiou, a Greek Cypriot, are among the many women who have partnered with the United Nations on the Mediterranean island to promote participation, equality and stability.

Ms. Toikan was born and raised in the northern city of Famagusta, and still lives there. She is a member of the Famagusta Cultural Association and studied Greek Language and Literature in Ankara, the cultural capital of Turkey.

Ms. Hadjigeorgiou, a retired teacher who fills her time with hobbies and other activities, is part of the Klotho Women’s Initiative.

Although both women are from different societies, they have a passion for weaving. However, neither of them were aware of their common bond.

“In the beginning, the friends of Mustafa and Maria who work in United Nations Peacekeeping Force in Cyprus She told us about the project, which is funded by the Dutch Embassy, ​​and asked us to apply,” Ms. Toikan said.

Hear our interview with Special Representative Elizabeth Spehar, who heads the UN mission:

The “Blue Helmets” are from the Mission Police and monitor the buffer zone between the Republic of Cyprus and the so-called Turkish Republic of Northern Cyprus.

The UN peacekeeping force in Cyprus is also facilitating projects to bring the two sides together.

“They put us in touch with the ladies from Famagusta, so a joint venture between the two communities began,” Ms. Hadjigeorgiou recalls.

Through a centuries-old tradition, women are beginning to weave a new relationship.

By collaborating on various textile projects, the women exchanged knowledge, opinions and ideas. This was Mrs. Hadjigeorgiou’s first experience.

“It helped a lot in the reconciliation because in this aspect, we had no contact with the Turkish Cypriots.”

“For the past three years, I work as a Greek teacher. I especially help them in the communication part, communicating in Turkish and Greek.”

forced to break up

Unfortunately, the COVID-19 The pandemic has raised new challenges. The women were forced to separate, just as they began to feel comfortable with each other.

“Our relationship with the Klotho Women’s Initiative has always been face-to-face meetings, but our communication has not completely stopped,” Ms Toikan said. “We ask about each other and what we do. Our work continues, but of course not as in the past.”

Even though everything has come to a halt due to the pandemic, the two women plan to continue weaving across the divided island.

“This is a very good example of collaboration,” said Ms. Hadjigeorgiou. It proves that the two sides can coexist. We have many common interests. Nothing separates the ladies from Famagusta and us.”

Although they initially felt like strangers, “through this cooperation between the two communities, we knew we were the same,” said Ms. Toikan, adding, “It is good to know.”