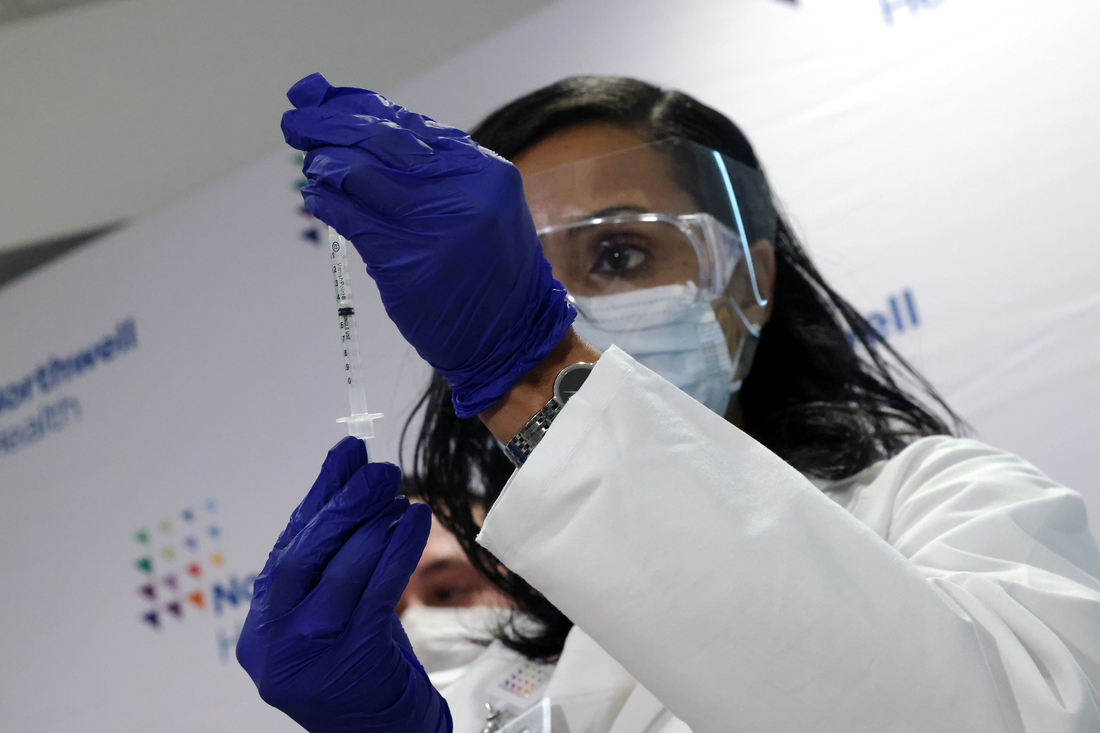 A medical worker at South Shore University Hospital gets ready to administer the newly available Johnson & Johnson COVID-19 vaccine in Bay Shore, N.Y., Wednesday. Clinical research found it to be 85% effective in preventing severe disease four weeks after vaccination, and it has demonstrated promising indications of protection against a couple of concerning variants of the coronavirus. 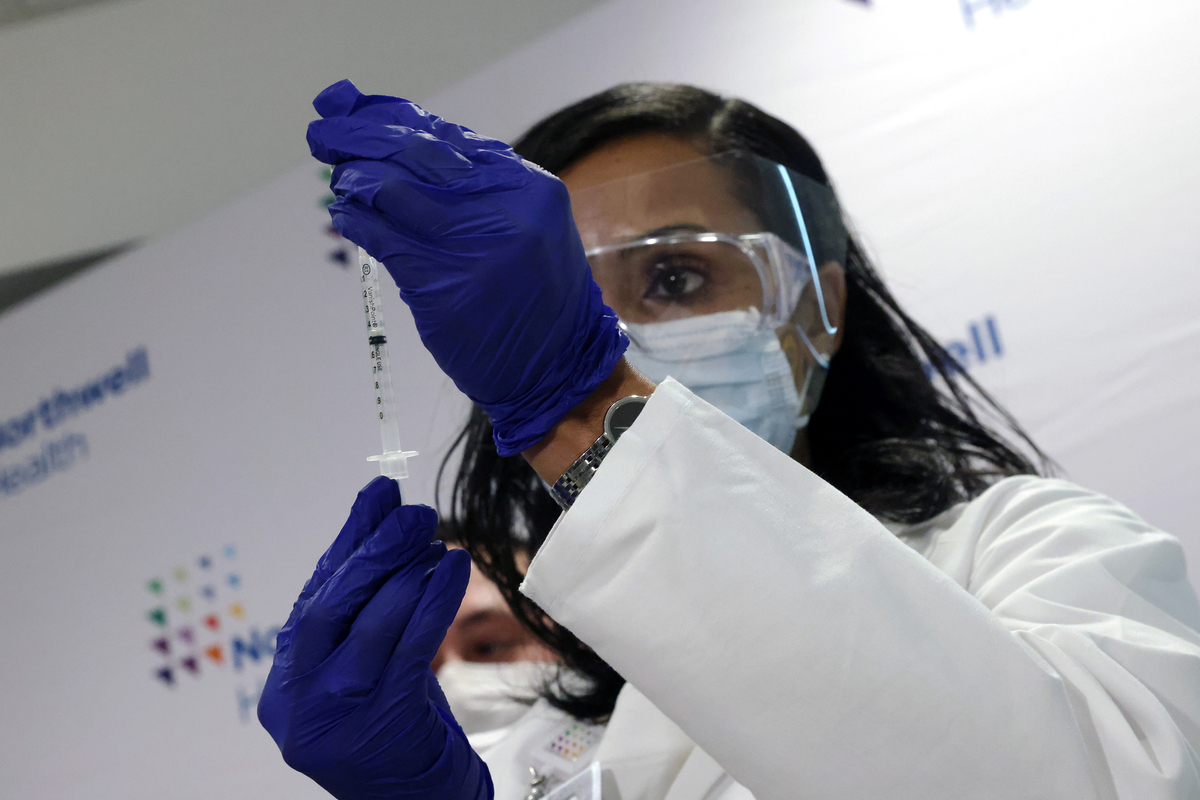 A medical worker at South Shore University Hospital gets ready to administer the newly available Johnson & Johnson COVID-19 vaccine in Bay Shore, N.Y., Wednesday. Clinical research found it to be 85% effective in preventing severe disease four weeks after vaccination, and it has demonstrated promising indications of protection against a couple of concerning variants of the coronavirus.

This week, health care providers began administering the first doses of Johnson & Johnson’s COVID-19 vaccine in the U.S. — the third vaccine authorized by the Food and Drug Administration to help stop the coronavirus pandemic.

That’s welcome news in a country that still faces high levels of circulating virus in most regions, and a demand for vaccine that still far outstrips supply.

The J&J vaccine has some significant advantages, health officials say. Unlike the Moderna and Pfizer vaccines, it can be stored for up to three months at regular refrigerator temperatures, so it’s easier to distribute to more places. And you’re fully vaccinated after just one dose — a welcome convenience for many recipients who dread the two-shot regimen of the Moderna and Pfizer vaccines.

Dr. Leana Wen, an emergency physician and professor at George Washington University, says that’s a big plus for the J&J vaccine.

“If there are individuals who may not like needles, who may have concerns about returning for a second shot, who may not want the inconvenience of scheduling a second appointment, or who may be concerned that there isn’t enough supply of the vaccine at the moment for a second shot — for those individuals, that convenience of being done [after one dose], fully vaccinated, is really important,” Wen says.

Still, the J&J vaccine is a little different from the others. Here’s what you need to know.

How does the Johnson & Johnson vaccine work?

The J&J shot is based on a different technology than the Moderna and Pfizer vaccines. Those use mRNA, or messenger RNA, to deliver bits of genetic code to cells. This code serves as a sort of instruction sheet — telling cells how to make a harmless piece of the spike protein that sticks out of the surface of the coronavirus. The immune system then learns to recognize the spike protein and fight it.

The Johnson & Johnson vaccine, by contrast, is what’s known as a viral vector vaccine — the same technology that’s been proven safe and effective in creating an Ebola vaccine and others currently in the works. Basically, Johnson & Johnson started with an adenovirus, which causes the common cold, and inactivated it so it can’t make anybody sick. They then used this harmless cold virus to deliver the genetic blueprint of the protein spike to cells, so the immune system will learn to recognize that spike when it runs into the coronavirus.

To be clear, the J&J vaccine “can’t give you the cold virus, and it definitely cannot give you COVID,” says Dr. Cassandra Pierre, an infectious disease specialist and acting hospital epidemiologist at Boston Medical Center.

Who should get the J&J vaccine?

The vaccine is authorized for people age 18 and older.

How long does it take for protection to kick in?

With all three vaccines, immunity builds over a few weeks after immunization. Data from Johnson & Johnson show that most vaccinated trial participants had a robust immune response 15 days after getting the shot, with significant protection reached by day 29.

Will I be as well protected against getting super sick with COVID-19 if I get the J&J shot as if I get a two-dose version from Pfizer or Moderna?

“When we look at the thing we probably care about most — making sure that we don’t end up in the ICU or dying — the efficacy of the three vaccines is virtually identical,” says Dr. Kirsten Bibbins-Domingo, chair of the department of epidemiology and biostatistics at the University of California, San Francisco.

The perception that some vaccines may be better than others has to do with the topline numbers from efficacy studies. The mRNA vaccines from Pfizer and Moderna were both found to be about 95% effective against preventing symptomatic COVID-19 after the second dose. The Johnson & Johnson vaccine, by contrast, was found to be 66% protective against moderate and severe disease overall worldwide, and 72% protective against such cases in the U.S.

But you can’t really compare those numbers head to head, says Pierre, because “these were different trials in different places at different times,” and the strains of the coronavirus running around were likely somewhat different. The Johnson & Johnson vaccine was tested more recently, including in South Africa and Brazil, at a time when more contagious variants of the coronavirus were widely circulating in those countries. The Moderna and Pfizer clinical studies, meanwhile, were started earlier, before such variants had become widespread.

Given those differences, Bibbins-Domingo says “the number you should probably compare is 85%” — that’s how effective the J & J vaccine was found to be at preventing severe disease four weeks after immunization.

Ashish Jha, dean of the Brown University School of Public Health, agrees that the J&J vaccine seems to be “terrific” at saving lives. He tells NPR he’s advising his family members to take whichever vaccine comes their way first.

Which vaccine offers the best protection against the worrisome coronavirus variants?

We can’t compare the vaccines head to head on this question, Pierre says, because the Pfizer and Moderna vaccines haven’t been subjected to rigorous clinical trials in places where these variants are widespread. But we can say that the Johnson & Johnson vaccine performs well against the variants first detected in Brazil and South Africa, because it was tested in both countries at a time when the variants were already rampant there. And in both countries, the J&J vaccine was still shown to be highly effective against severe disease, according to an analysis posted by the FDA.

“What we see is that we still have good efficacy with this vaccine regardless — even in these areas where the variants were highly prevalent,” Pierre says. “And I think that’s really a fire-tested way to say that this particular vaccine is unequivocally good.” She notes that preliminary data also suggest the J&J vaccine might offer protection against asymptomatic infection.

Why shouldn’t I just hold out for the vaccine with the highest efficacy rate?

Get whichever vaccine you can as soon as you’re eligible, Pierre, Jha and other infectious disease experts urge. The longer you go unvaccinated, the longer you’re at risk of contracting a COVID-19 infection that potentially could kill you.

“I view it as a race against time,” Pierre says, based on the data and her own experience with her mom. Pierre scrambled to schedule an immunization appointment for her mother as soon as the older woman became eligible. But before she could get immunized, she was diagnosed with COVID-19.

Pierre’s mom recovered from that infection, but more than 500,000 other Americans have not been so fortunate.

Any particular safety or efficacy concerns that people with underlying conditions should worry about with the J&J vaccine?

The CDC says any of the three COVID-19 vaccines authorized for use in the U.S. can be given to people with underlying medical conditions, as long as they don’t have contraindications, such as a history of severe allergic reaction to a previous dose of a vaccine or any of its components.

Medical specialists who care for people with diabetes, cancer, coronary artery disease or other conditions that put them at increased risk of severe disease if they get COVID-19 are encouraging their patients to get vaccinated.

The guidance for anyone pregnant or breastfeeding is more nuanced: The CDC and groups such as the American College of Obstetricians and Gynecologists say all three vaccines should be made available to those who are pregnant, but they leave the choice about whether to get vaccinated up to each individual. That’s because pregnant people were excluded from the initial clinical trials for all three vaccines, so there’s no firm direct evidence yet on how the vaccine will perform in this group.

That said, taking into account work with other vaccines and animal data, the CDC says that “based on current knowledge, experts believe that COVID-19 vaccines are unlikely to pose a risk to the pregnant person or fetus.” Meanwhile, getting COVID-19 can pose a significant risk: Research from the past year has shown that those who are pregnant are at higher risk of a severe case of the disease if they get infected.

Pfizer has recently started a large trial of its vaccine among those who are pregnant, and J & J says it also has plans for such a trial, so more direct evidence about efficacy in that group is on the way.

Though it’s not yet known whether the COVID-19 vaccines will be as effective among patients who are immunocompromised as they are in other people, the vaccines are safe for that group, and “it is recommended that people who are immunocompromised can get this vaccine,” says Dr. Kathleen Mullane of the University of Chicago School of Medicine. She’s an expert in the treatment of infections in immunocompromised patients — such as organ transplant recipients — and served as an investigator in clinical trials for both the Moderna and Johnson and Johnson vaccines.

Mullane advises that no matter which COVID-19 vaccine an immunocompromised patient signs up for, they should talk to their doctor ahead of time. There’s a chance their doctor may adjust the patient’s usual medication or treatment schedule ahead of the shot in order to boost the vaccine’s effectiveness. Your own medical team knows your situation best, and is your best guide in this case, Mullane says.

What kind of side effects should I expect with the Johnson & Johnson vaccine?

Just as with the Moderna and Pfizer vaccines, the most common side effects are pain and redness at the site of injection, chills, headaches, nausea, body aches, fatigue and fever for a day or two. But many people who get these vaccines don’t experience any side effects. If you do feel achy or feverish after the shot, it’s fine to take a painkiller like Tylenol or ibuprofen, but don’t take it beforehand — that might blunt the immune response, Pierre says.

Side effects tend to be more common in young people because they have more robust immune systems, so it’s just a sign that the vaccine is doing its job, Bibbins-Domingo notes. If you don’t experience side effects, don’t worry either, she says — there are plenty of vaccines “where the most you might feel is a little bit sore at the injection site.”

As with any of the COVID-19 vaccines, there is a remote chance that you could experience a severe allergic reaction, according to the FDA; this would most likely occur within a few minutes to an hour after getting the shot. That’s why vaccinators ask people to stick around for 15 or 30 minutes after getting the shot so they can be monitored and treated if that extremely rare event happens.

As Wen says, “We also want to put an end to this pandemic as soon as we can. And that means getting some level of immunity into as many people as possible and as quickly as possible.”